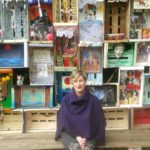 Julie Goo is a Cork-born slam poet and singer. She also writes in the Irish Language, under the name Julie Field, and has published poems in many of Ireland’s leading Irish Language Literary Magazines. Goo has performed at a wide range of festivals and events including: TedX Cork, Winter Warmer, The Kino, Circus Factory, First Fortnight, Ó Bhéal, Electric Picnic, Indiependence, Body & Soul, Live at at St. Luke’s, Connolly’s of Leap, The Quarter Block Party, and Cork Midsummer Festival.
Goo was crowned Munster Slam Champion in 2012, and has represented Munster in The All Ireland Slam twice.
GooLally Productions was created in the summer of 2017 when Julie Goo combined her work with fellow wordsmyth Cormac Lally, and their show ‘Me, Myself, and Ireland’ was born and performed nationwide.
Goo’s poem ‘Laundry’ was shaped into a poetry film in 2016 by Aisling Keating, and has been screened at Ó Bhéal, The Friary and Dali & Gala. Goo has collaberated with many musicians and dj’s over the years also.
Her slam poetry is socially conscious, politically driven, uplifting and open hearted.