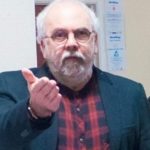 Although John Eliot’s origins are Welsh, he considers himself to be a French citizen. He has lived in France for 25 years and expects to continue to do so. He founded the St Clémentin Literary Festival which he organised three times before it became integrated within the present village festival. John makes appearances reading his poetry and read at the Musée des Beaux Arts, Angers, France, where he was commissioned to write poetry for French photographer Laurent Millet.
John Eliot is a poet, columnist and critic. He has three poetry collections published by Mosaique Press. His work can be found in other anthologies, most notably in America and India. He writes a monthly column for the Magazine Kwee which is published in Africa, Asia and America.
On Welsh radio he has been described as one of Wales best living poets. Returning to his roots in Wales this year he is the principal reader at the Swansea festival where he also will be leading workshops.
John’s poetry can be found in good bookshops and online stores.