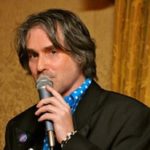 Stanley Notte is a writer and poet whose work has appeared Writer’s Magazine, The Galway Review, Stanza’s Monthly Chapbook’s, O’Bheal anthologies, Cork’s Evening Echo and been featured on RedFM (Cork), Soho Radio London and Lagan Online’s Poetry Day Ireland Mix Tape. As a spoken word artist Stanley has appeared at a variety of festivals and Slam Poetry events, most recently the Limerick Fringe Festival 2019.
As a mental health advocate he has performed in Cork Prison, corporate health awareness events, was a featured speaker at ‘The Changing Man’ Tedx event in Jan 2017, and was a support act for Stephen James Smith on his 2018 UK and Ireland Tour. His poetry film Peter and the Wolf – Alladin Sane? (After David Bowie) was short listed at the Cork Indie Film Festival in 2016, screened at the Dublin Bowie Festival in January 2017, and long listed at the Rabbit Heart Festival 2018.
Mrs Xavier (after The Frank and Walters), his most recent poetry film, place 3rd at the Doolin Writers Festival in 2019.
In 2017 Stanley was chosen to perform in the UK as part of the Twin Cities cultural exchange between O’Bheal (Cork) and Fire and Dust (Coventry).
Stanley is the co-founder and curator of Soltice Sounds, a bi-annual magazine that is Ireland’s only regular spoken word publication.